One of my projects over the past couple of years has been Synit, a Syndicate init (really, systemd and D-Bus) replacement. Synit underpins another project, #squeak-phone, a sketch of an alternative to Android for personal computing on a mobile device.

These are one-person projects at present, and the current round of development is coming to a close. This is a summary of where things stand.

Outcomes. It runs! Smalltalk on a phone. Weird but fun alternative universe, not Android, not systemd. You can make calls, send/receive SMS, use cellular data, WIFI, look at maps, etc. No browser yet. 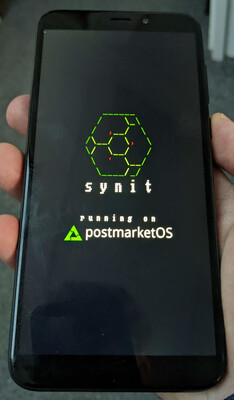 Synit is my experimental alternative “system layer” for Linux. I chose to use my #squeak-phone project as the initial vehicle for exploring the idea.

Squeak-phone uses the Syndicated Actor Model in conjunction with Squeak Smalltalk and a few other bits of software to have a foundation for exploring an alternative universe of mobile personal computing.

I’ve written a few posts about it both on this site and on eighty-twenty.org). This page outlines the portion of the project that was funded by NLNet’s NGI Zero. (Thanks, NLNet!) The Synit project has a homepage at synit.org now, with links to documentation and code. Common Syndicate parts of the project of course remain here at syndicate-lang.org and in the Syndicate git repositories.

Booting Linux into a Syndicated world

The prototype Synit system is based on postmarketOS, which is an Alpine Linux distribution for cellphones. Synit adds a few custom Alpine packages, one of which does unspeakable things to the normal postmarketOS packages to outright replace /sbin/init with a Syndicate replacement.

The first thing the Syndicated PID 1 does is start a syndicate-server instance as the root system bus, which then uses Erlang-style supervision patterns to spawn the rest of the system.

Smalltalk as the phone UI 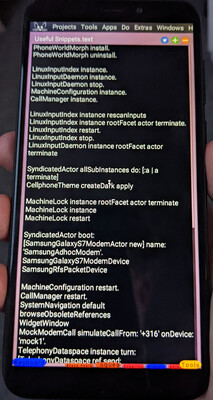 After booting, the most-recently-saved Smalltalk image comes back to life.

One of the actors started by the system bus is a Squeak Smalltalk image. The photo here shows the Smalltalk image just after the phone completes booting: it has a Smalltalk workspace visible, containing useful snippets of Smalltalk code for interacting with the phone that I can execute with the tap of a (couple of) finger(s).

It’s a regular Smalltalk image, so I can make changes to the code, save snapshots, and so on. When I reboot the phone, the most recent image snapshot is loaded.

Lots of languages working together

Both PID 1 and syndicate-server are written in Rust, but system actors can be written in any language that speaks the Syndicate protocol; this currently means TypeScript/JavaScript, Bash (!), Smalltalk, Python, Nim, Rust, and Racket.

The system is reactive. It self-organises around the information placed in the system dataspace. Schemas are used to strongly (dynamically) type the system. Object-capabilities are used to secure the system. Various system actors react to changes in the machine’s environment, such as (dis)appearance of WIFI SSIDs, hotplugging of devices, and so on.

One of the schemas, ui.prs, describes a Syndicate protocol for user interfaces. It’s a very rough sketch at the moment, and woefully underdocumented - but here are a few “applications” written using it:

Each application is a Syndicate actor running either inside the Smalltalk image or as a neighbouring process on the system, interacting with a Smalltalk UI daemon that speaks the protocol defined in ui.prs.

The UI-presenting actors are separate from the actors that manage the underlying information, such as the brightness status and control, or the details of the system’s current power status.

The on-screen keyboard is a simple Smalltalk program. The red, blue, and yellow rectangles beneath the keyboard are shift-like keys used to change the interpretation of a finger tap: they correspond to left, middle, and right-clicks, respectively. 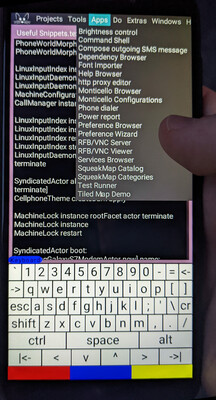 The placeholder “apps” menu, including both SqueakPhone and ordinary Squeak “applications”.

A little Smalltalk program wraps a TiledMapMorph I wrote a few years ago to provide a “map” application, backed by OpenStreetMap by default.

The system enables cellular data by default, so the maps can be used when you’re out and about. You can configure WIFI SSID/password information, too, but you have to do it using a text editor at the moment. There’s only one of me!

Finally, it’s still very much a regular Smalltalk system, with only the lightest of customisation for handheld use. All the normal Squeak “applications” are available, such as version control, code editing, font management, preference settings etc.

I think the experiment so far has been a success.

The big reusable pieces, likely to find application in other projects besides the continuation of this one, are Preserves, Preserves Schema, the Syndicated Actor Model itself, and the syndicate-server program.

The idea of synit—using Syndicate as a system layer, replacing D-Bus, systemd and so on—has worked out really well, and I want to try it out for desktop and server systems, too.

Smalltalk-on-a-phone is also really promising, and it’s super fun to be able to hack about with the phone without needing a separate desktop/laptop system to develop on. However, careful design of both the user interfaces as well as the underlying system protocols will be crucial to actually make a usable and securable system. The system-layer stuff is simple in comparison.

Lots remains to be done. I’m looking forward to it!